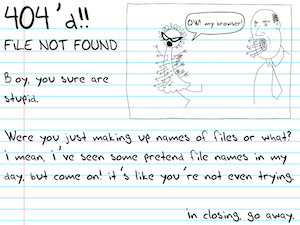 I had some fun with the problem of sustainability in my Digital History course last year. One of our core texts, Digital History: A Guide... by Dan Cohen and Roy Rosenzweig, has an entire chapter on preservation. Although the book itself is a decade old, the concepts and analysis remain remarkably fresh, and it is still a popular touchstone that is widely assigned in DH courses on the undergraduate and graduate level. Given the rapid pace of technological development, however, a new edition is badly needed. DH staples, such as Omeka and WordPress, or even Twitter and Wikipedia, were not yet on the radar when the book was published, and many of its examples are comically outdated. The authors spend several paragraphs discussing Jim Zwick’s famous website: “Anti-Imperialism in the United States, 1898–1935.” So I asked my students to evaluate the site for themselves. Of course, this was an impossible task, since the site no longer exists.

If done carefully and respectfully, I have found that tricking my students with phony texts or assignments like this can be both fun and enlightening. In this case, I offered to treat the entire class to an expensive meal if any one of them could find me a copy of Zwick’s site, in any format. Despite vigorous efforts on the Wayback Machine, Google, and even the Darknet, no one could find any trace of it. I gave them the entire semester to complete the challenge, and they still turned up nothing. Aside from a few tantalizing reviews, this huge, popular, exemplar DH project had been completely wiped from the face of the earth. Zwick’s death in 2008 means that the site, and all of its related data, guides, and analysis, will probably never return. At least in its original form, it has been lost forever. What goes on the Internet does not always stay on the Internet. (My students received a pizza lunch at the end of the semester anyway.)