I am an inveterate Mac user. Some might say I’m a fanboy. Although I like to think that my brand loyalty is due to a cleaner, easier, more pleasing operating experience, there are other factors. Part of my attraction stems from the “Think Different” ad campaign of my youth – flattering for any impulsive iconoclast. Or maybe it’s that soothing chime. I don’t agree with everything Apple has ever done, especially now that they’ve thundered into the mainstream, but I still think that, when all is said and done, they can produce a better quality product than the competition (now if only they could do it humanely). Apple devices are marketed as polished, eloquent, intuitive. A common complaint about Microsoft, on the other hand, is that they have trouble releasing a finished product. Windows is notorious for being incomplete, buggy, awkward, in need of an endless cascade of updates and service packs. Of course, Mac OS X, Linux, Android, and every other decent piece of software does exactly the same thing. OS X has endured at least seven major revisions in the past decade, while Windows has suffered maybe three (it all depends on your definition of “major revision”). This endless turnover used to bother me. Does Firefox really need to release a new version every other day? How much useless bloat can software designers cram into MS Word before it finally explodes? Lately, however, I’ve come to accept and even embrace this radical incompleteness.

The age of static print was defined by permanence. Authors and editors had to work for a long time on multiple drafts, revisions, and proofs. The result was a clay tablet, or a scroll, or a codex book. With the onset of the printing press, it was easier to make corrections. Movable type could be reset and rearranged to create appended, expanded, and revised editions. Still, the emphasis was on stability. The paperback book I have on my desk right now looks pretty much exactly the same as it did when it was first published in 1987. And it will always look that way. A lot of effort went into its publication because it would be extremely difficult to revise it. It is a stable artifact. Digital culture, on the other hand, is a permanent palimpsest. What is here today is gone tomorrow, all that is solid melts into air. Digital publications do not have to be fully polished artifacts because they can be endlessly revised. There are benefits and drawbacks to this state of almost limitless transition. But now that the Encyclopedia Britannica has thrown up its hands and shuttered its print division, perhaps it is worth asking: what do we have to gain from adhering to a culture of permanence?

In the world of static print, errors or inaccuracies are irreversible. Filtration systems, such as line editing or peer review, help to mitigate against this problem, but even the most perfectionist among us are not immune from good faith mistakes. We have all had those moments when we come across a typo or an inelegant phrase that makes us cringe with regret. How wonderful would it be to correct it in an instant? And why stop at typos? Less than a year after I published an article on abolitionist convict George Thompson, I was wandering around in the vast annex where my school’s library dumps all of its old reference books. Here were hoary relics like the National Union Catalog or the Encyclopedia of the Papacy. I picked up a dusty tome and, by dumb luck, found an allusion to Thompson’s long-lost manuscript autobiography. When I wrote the article I had scoured every database known to man over the course of two years, including WorldCat and ArchiveGrid. But the manuscript, which was filed away in some godforsaken corner of the Chicago History Museum, had no corresponding  entry in any online catalog. I had to e-mail the museum staff and wait while a kindly librarian checked an old-school physical card catalog for the entry (so much for the vaunted age of digital research). Although it was too late to include the document in my article, at least I had time to include it in my dissertation. But what if I could include it in the article?

The perfectionist temptation can be disastrous. No doubt this impulse to continually revise is what led George Lucas to update the first three Star Wars films with new scenes and special effects. Many fans thought that the changes ruined the experience of the original artifacts. It may be better in some cases to leave well enough alone. Yet there is something to be said for revision. One of the things I love about the Slavery Portal is that it is constantly evolving. I am always adding new material or tweaking the interface. When I find a mistake, I fix it. When new data makes an older entry obsolete, I update it. Writing History in the Digital Age, a serious work of scholarship that is also technologically sophisticated and experimental, uses Commentpress to enable paragraph-by-paragraph annotation of its content. Thus a peer review process that is usually conducted in private 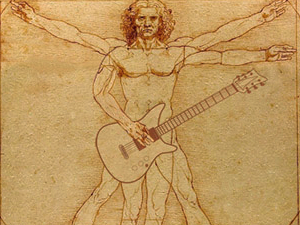 among a small group of people over a long period of time becomes something that is open, immediate, collaborative, and democratic. Projects like this have landmarks, qualitative leaps, or nodal points, just like software that jumps from alpha stage to beta release or version 10.4.11 to 10.5. But they are always in process. For every George Lucas, there is a Leonardo da Vinci. The Florentine Master only completed around fifteen paintings in his lifetime and was a consummate procrastinator. His extensive manuscript collection remained unpublished at the time of his death and largely unavailable for a long time thereafter. What if da Vinci had a blog? (I can just imagine the comment thread on Vitruvian Man: “stevexxx37:  wuz up wit teh hair? get a cut yo hippie lolz!”)

Although I sometimes still agonize about fixes or changes I could make to older work, I have found that dispensing with the whole pretense of permanency can be tremendously therapeutic. Rather than obsess over writing a flawless dissertation, I have come to embrace imperfection. I have come to view my thesis or my scholarly articles not as end products, but as steps in a larger progression. In a sense, they are still drafts. In the sense that we are always revising and refining our understanding of the past, all history is draft. Static books and articles are essential building blocks of our historical consciousness. It is hard to imagine a world where the book I cite today might not be the same book tomorrow. And yet, to a certain extent, we live in that world. When Apple finds a security loophole or a backwards compatibility issue in its software, it releases a patch. If I find a typo or an inaccuracy in this post three days from now, I can fix it immediately. If I come across new information a year later, I can make a revision or post a follow-up. Everything is process. The other day, I updated the firmware on a picture frame.

I will, of course, continue to aim for the most polished, the most perfect work of which I am capable. As much as I would like, I cannot write my dissertation as a blog post. I will edit and revise, edit and revise. Sometimes you do not know what you need to revise until you make it permanent. At the end, maybe, I will have a landmark. And I will welcome its insufficiency. There is something liberating about being incompl…