Google’s recent showdown with China has drawn a lot of media attention, but historians and other digital humanists have also been paying closer attention to the search engine giant. Dan Cohen’s talk at the American Historical Association meeting in San Diego this month tackles the question:”Is Google Good for History?” The talk, which is posted in full on Cohen’s blog, answers with a qualified but overwhelmingly positive “yes.” 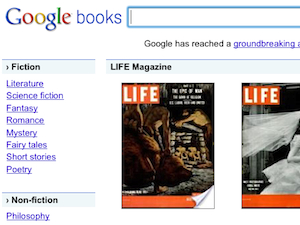 Cohen devotes most of his analysis to the controversial Google Books project. Although seen as a tremendous boon by most researchers in the humanities, the project is far from perfect. In a popular article published in the Chronicle of Higher Education last year, linguist Geoffrey Nunberg argues that Google’s database is not yet the omniscient text-mining tool of which many have been dreaming. Not only is the database incomplete, Nunberg points out, it is riddled with basic factual errors and misinformation. The full title of his article is Google’s Book Search: A Disaster for Scholars. At least one Google employee has written a forceful rejoinder to these charges.

Although he laments the closed, proprietary nature of the Google Books interface, Cohen agrees that detractors are looking a gift horse in the mouth. He writes that his students “regularly…discover new topics to study and write about through searches on Google Books.” Moreover, he argues, large-scale data mining on Google challenges the traditional model of historical research, in which analysis is based on careful extrapolation from a limited number of sources. The old model, which Cohen labels “anecdotal history,” can now be replaced by a more comprehensive method, rooted in thousands of terabytes of digital data. According to Cohen: “our analog, necessarily partial methods have…hidden from us the potential of taking a more comprehensive view, aided by less capricious retrieval mechanisms which, despite what detractors might say, are often more objective than leafing rapidly through paper folios on a time-delimited jaunt to an archive.”

At the end of his piece, Cohen issues a call for historians to push Google in a better direction and for Google to study and adopt some of the strategies and methodologies used by historians. But the debate lingers. Is Cohen right about the stark rift between analog and digital modes of historical research? Do you use Google Books in your research and teaching? If so, how?

UPDATE: I’ve just read a new article by Harvard Law Professor Lawrence Lessig on the recent Google Books settlement. Lessig argues that the terms of the agreement set the stage for “a catastrophic cultural mistake.” The prose is accessible, the argument is lucid, and the critique of the insanity that is current copyright law is frankly, brilliant. This article should be mandatory reading for anyone interested in a career in the humanities.

Another brilliant article on Google Books was published recently by the History News Network. Discussing the French reaction to Google’s project, the author reminds us that the idea of the “information marketplace” is a historical (and political) construction.