One of the more interesting concepts developed by Karl Marx (himself one of the more interesting characters in the period of history I study) is the notion of commodity fetishism. The details of the theory, as outlined in volume one of Capital, are a bit complex, but they can be summarized relatively easily. When you enter a modern marketplace, say Amazon.com, to purchase a commodity, say that new Kindle you’ve had your eye on, you do not have access to all of the steps that produced that commodity. You do not see what parts make up the Kindle, where they found the raw materials, how the various pieces traveled to the various factories, who hired the workers, who made the screen, who designed the microchips, who assembled the chassis, who coordinated the whole process, etc. You see only an end-product, a commodity, which you acquire by trading another commodity (money). So what looks like a straightforward exchange between two discrete objects of equal value, money for Kindle, is actually an incredibly complex and layered social interaction involving people, material, infrastructure, governments, trade policies, etc. from all corners of the world. When you purchase a product, however, you rarely think about all this. Each step, each transaction in the commodity chain constructs an elaborate, if delicate fantasy. “A commodity,” writes Marx, “is a mysterious thing.” Although I don’t have any direct proof, I suspect that Marx borrowed the idea of commodity fetishism from antislavery activists. At the very least, he absorbed it from the wider Victorian culture of which he was very much a part. Exposing the social reality, the horrific human toll, behind slave-produced commodities is one of the oldest and most important strategies of abolitionist movements. The image at left first appeared in 1787, accompanying a book written by Voltaire three decades earlier. It shows a Surinamese slave, mutilated and broken, lying on the ground near a plantation; the caption reads: “This is the price for the sugar you eat in Europe.” In the original book, published in 1759, the slave castigates les fétiches hollandais (Dutch fetishes) for preaching universal brotherhood while at the same time reducing him to the level of an inhuman object. The slaves who helped produce consumer goods, as Walter Johnson and Edward Baptist establish, were themselves highly fetishized commodities. Abolitionists aggressively promoted free labor sugar and cotton as antidotes to the global trade in human beings. Consumer boycotts and efforts to market “free produce,” as Carol Faulkner and Lawrence Glickman argue, developed alongside opposition to slavery.  The same impulse lives on today in “fair trade” coffee and “made in the USA” stickers. Even the “free trade” fundamentalism that emerged in Victorian England, as Richard Huzzey shows, was deeply rooted in antislavery strategy.

Slavery Footprint, launched last month by a nonprofit group in collaboration with the US State Department, puts a new spin on this old story. The website offers users a simple survey to determine “how many slaves work for you.” The type and amount of clothes you own, the food you consume, and other lifestyle choices all factor into the calculation. In the end, I discovered that I have 23 slaves working for me, which is on the low end of the spectrum. Some estimates place the total number of enslaved individuals as high as 27 million (more than the entire population of the state of Texas). A mobile app linked to the site, called “Made in a Free World,” allows you to monitor progress against human trafficking and earn points by pressuring corporations to clarify their supply chain. Slavery Footprint joins a growing body of digital platforms aimed at demystifying 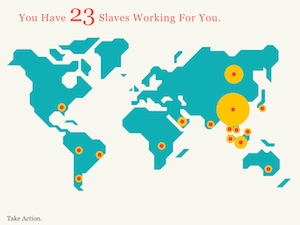 commodities. SlaveFree, developed by the same group, encourages users to post images of their consumer goods accompanied by a demand to liberate them from forced labor. Free2Work allows smartphone users to scan UPC codes to learn how different corporations are implicated in global slavery.  Historians Against Slavery offers a framework for combining scholarship with activism. CNN has launched the Freedom Project. And no doubt there will be many more. Demand on Slavery Footprint was so overwhelming that it crashed the site almost immediately after its launch.

The irony of these initiatives is that they rely on the very same global corporations that they critique. You are not allowed to use the “Made in a Free World” app, for example, unless you agree to join Facebook. The conflict minerals and child workers that help generate touchpads, smartphones, and other low-cost, mass-produced interfaces also help fuel the campaign to eliminate them. Apple made this clear just a few weeks ago, when it quickly yanked a new app called “Phone Story.” The program, which shows some of the brutal child labor that forms part of the commodity chain for the iPhone, is unavailable to Apple customers. “Apps that depict violence or abuse of children,” announced the company, “will be rejected.” Abolition itself is a commodity dependent upon slave labor – inadmissible under its own moral logic.

Earlier abolitionist movements also relied on a consumer revolution, high-speed printing presses, advances in travel and communication, and an increasingly interconnected globe to spread their message. And where slaveholders and their sympathizers influenced those technologies (the national mail, segregated railroad and steamboat cabins, pass systems) abolitionists had a harder time. The present campaigns recall much of this earlier form of activism, usually called “moral suasion.” Yet there are important differences. Slavery is now illegal, at least nominally, in most of the world. Although earlier abolitionists denounced the “unhallowed union” between manufacturers and slaveholders and saw “wealthy capitalists” as impediments to their cause, they did not focus their efforts on improving corporate citizenship. They certainly did not collaborate with the State Department (at least not until the Civil War, when abolitionists participated in the Freedmen’s Bureau and other reconstruction initiatives under Lincoln’s successors).

Like their predecessors, recent campaigns tend to place more emphasis on the purity of the purchaser than on the plight of the victim. “[N]one of us want to wear people’s tragedy,” argues the president of Call + Response, the organization behind Slavery Footprint. “We don’t want to consume their suffering where we have coffee with sugar poured in it.” It is worth remembering that no entrenched system of slavery was ever abolished by boycott or free produce movements. In parts of Africa, the introduction of “legitimate commerce” accompanied an expansion and intensification of enslavement. In most cases, it took a combination of grassroots action, international pressure, and direct government intervention to end slavery; in the United States, it took a revolution. At the same time, consumer awareness campaigns, breaking through all that commodity fetishism, are indispensable to abolition. Ian Baucom calls this “melancholy realism,” but could it also be empathetic or liberatory realism?

In a world where we are even more removed from the source of slave labor than the original abolitionists (who could hop the nearest steamboat south of Jersey), what does it mean to consume someone’s suffering? What does it mean to quantify your contribution to the elimination of forced labor with virtual points?